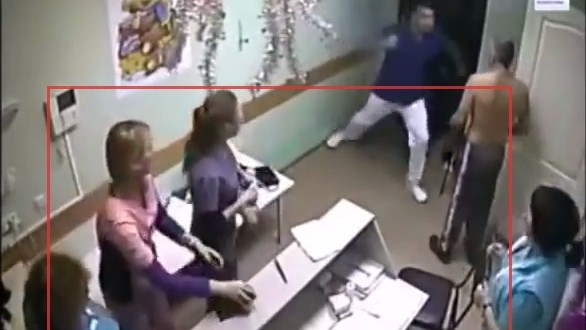 A Russian doctor has been captured on video punching a patient who later died, prompting authorities to open a criminal investigation.

The clip of the Dec. 29 incident from Belgorod aired on state television and has gone viral, the Telegraph reported.

The doctor — dressed in what appear to be blue and white scrubs — entered the examination room, grabbed a shirtless male patient from an examination table and asked, “Why did you touch the nurse?” the Telegraph said.

After the doctor was seen pushing the patient through a doorway, the doctor dealt blows on another man who apparently was with the shirtless patient.

When the patient came back into the room, the doctor landed a right-handed punch to the patient’s head and appeared to push with his left, knocking him flat on his back.

After the doctor punched the second man again, the staff and the doctor exited the room. Several minutes later the doctor returned and saw that the patient he punched wasn’t moving. He and others tried to revive him with no success.

Belgorod’s Investigative Committee said doctor hit the patient in the face after he “kicked a nurse during a procedure,” the Telegraph reported. ”The cause of death of the victim was trauma to the skull and brain from hitting the back of the head on the hard surface of the floor.”

More from the Telegraph:

Russian media named the doctor as Ilya Zelendinov, a surgeon at the hospital, and the patient as 56-year-old Yevgeny Bakhtin.

Investigators said the doctor was suspected of causing death through negligence, for which he could serve up to two years in jail.

He has been fired from his job but remains free after signing a declaration that he will not travel during the investigation.

Investigators denied any delay, saying they opened a criminal probe the day after the incident, after the hospital reported the death and a post-mortem showed a head injury.

The relatively minor charge reflects the fact there is “no grounds to say that the doctor wanted to murder the patient,” investigators said.

“If the victim had stayed on his feet or hit his head on a less hard surface, the consequences would not have been so critical.”

Web articles – via partners/network co-ordinators. This website and its contents are the exclusive property of ANGA Media Corporation . We appreciate your feedback and respond to every request. Please fill in the form or send us email to: [email protected]
Previous: Shyamalan Producing New Tales From the Crypt Series for TNT (Video)
Next: Toronto police investigating taxi scam (Video)