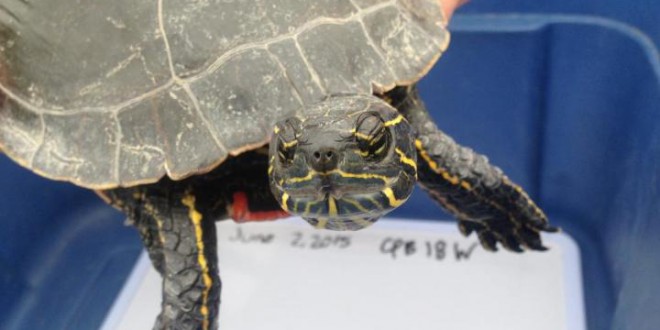 A Western Painted Turtle found in Regina is believed to be the largest of its species.

Two University of Regina Biology student/researchers have found what is believed to be the largest Western Painted Turtle. It happened in the marsh area of Wascana Lake in Regina.

“We were extremely ecstatic,” says Marchand. “Our hands were shaking we were so excited as we tried to measure it. When I first saw her head pop out of the water I honestly thought it was a snapping turtle, like it was such a massive head.”

After the two calmed down, they took a careful measure of the turtle and it came in at 26.6 centimetres. They named it Olga, in honour of the powerful female Viking character. After a check of peer reviewed publications, it was confirmed Olga was a record setter.

Another turtle, Houdini, was also found in the same area of Wascana. That one measured 25.3 centimetres, falling just short of number one but still an impressive size.

It’s believed the two are at least 30 years old but could be as old as 50.

Marchand and Stulberg have been lakeside at Wascana for about a month, researching this turtle species. Olga and Houdini have been fitted with miniature radio transmitters and released into the marsh. Now researchers can keep track of the turtles’ movements.

This research project is a collaborative effort between the U of R, Wascana Centre Authority, Friends of Wascana Marsh and the Royal Saskatchewan Museum. The discovery now has scientists asking more questions.

“Why are the turtles we caught, so big? Is it because there’s something here that allows them to grow big? Is there something here that allows them to grow old? Whatever it is, it leads us to those scientific questions about why we are finding big turtles in Wascana,” says Dr. Ray Poulin, Research Scientist and Curator of Vertebrate Zoology at the Royal Saskatchewan Museum. He’s also Adjunct Professor in Biology at the U of R.

Western Painted Turtles are the most northerly turtle species found in Canada.

“Turtles have a tough life here in Saskatchewan,” says Dr. Chris Somers, Associate Professor of Biology at the U of R and one of the supervisors of this project. “It’s cold for a long period of time. We don’t know how they make a living, particularly in a place like an urban centre, Wascana Lake here. We really want to know how turtles manage to eake out a living here and how that might make them different from turtles that live in other places that have it easier.”

Web articles – via partners/network co-ordinators. This website and its contents are the exclusive property of ANGA Media Corporation . We appreciate your feedback and respond to every request. Please fill in the form or send us email to: [email protected]
Previous: Ludacris : US rapper has welcomed a baby girl
Next: Businessman Gets 12 Years For ‘Eye-Popping’ $108 million Fraud Spree