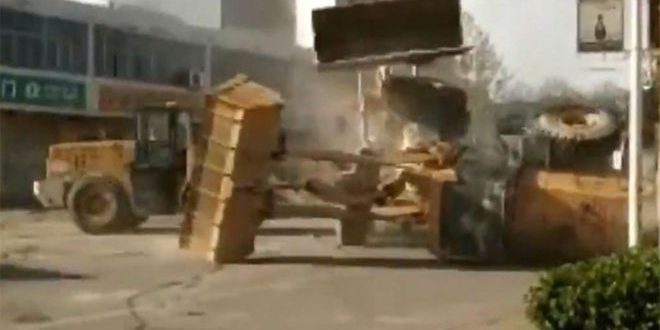 Like a duel between rival street gangs, two Chinese construction firms have taken their feud to the streets.

Half a dozen bulldozers and front-end loaders got into a battle royale on a Chinese street on April 17th, using their buckets and blades as weapons to push and claw at one another.

A video captured at the scene showed the clash involving at least six bulldozers ramming into each other or trying to evade the scuffle. A few seconds into the video, one of the bulldozers is toppled over by a rival counterpart. A figure is seen crawling, unhurt, out from the defeated digger and running for cover while a second bulldozer comes and tries to lift the fallen one back to its feet.

The brawl soon covered the entire street in dust and blocked the oncoming traffic, but came to an end when the police arrived on the scene. The six vehicles were all damaged to various extents and two of the drivers suffered from minor injuries.

Xu Feng, a local government official in Xingtang county said Monday, the bulldozers belonged to two competing businesses and refused to comment further on the cause of the fight or arrest until an investigation was conducted.

China’s construction industry has fallen on hard times with two-thirds growth decrease from last year. The real estate construction takes up a quarter of the economy and the slump in the industry has resulted in major layoffs in the glass, cement and steel sectors.

Web articles – via partners/network co-ordinators. This website and its contents are the exclusive property of ANGA Media Corporation . We appreciate your feedback and respond to every request. Please fill in the form or send us email to: [email protected]
Previous: Man Trapped in Sinking Car Rescued by TV Reporter “Video”
Next: World’s oldest dog dies aged 30; in her sleep