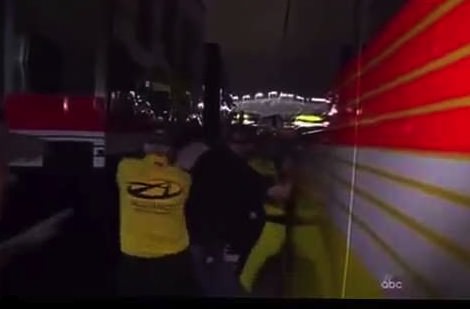 NASCAR drivers brawled in the pit lane Saturday after a number of feisty incidents on the track, throwing the sport into the headlines for all the wrong reasons once more.

Kevin Harvick was celebrating his victory in the Sprint Cup in Concord, North Carolina, but all the attention was quickly diverted elsewhere as running battles erupted.

As NASCAR driver Brad Keselowski was walking between two haulers in the infield after the race at Charlotte Motor Speedway on Saturday night, he was attacked by fellow driver Matt Kenseth.

Web articles – via partners/network co-ordinators. This website and its contents are the exclusive property of ANGA Media Corporation . We appreciate your feedback and respond to every request. Please fill in the form or send us email to: [email protected]
Previous: US : Enhanced Ebola screenings begin at JFK
Next: Australian beaches closed after shark attacks inflatable canoe