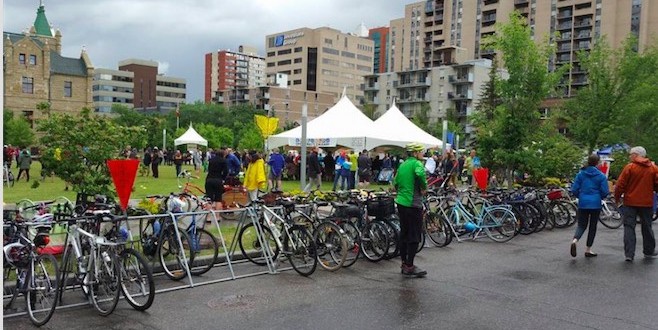 Despite the soggy conditions, bike lovers gathered at a Beltline park Sunday, to show support for the city’s newly opened cycle track.

A few city councillors were on hand for the event at Barb Scott Park in the southwest.

Gian-Carlo Carra, Ward 9 councillor, says the bike lanes are a great initiative however some kinks still have to be worked out.

“Because it’s designed as a pilot we can tinker with it and we can get it right before we lock it in. I think it’s less a question of whether this is going to be successful or not, because already zillions of people are using it, it’s going to be more and more successful because we have the ability to analyze the data and refine it and refine it and get it exactly right.”

He notes that he’s been flooded with emails from people saying how great the new lanes are.

The one-year pilot project finished ahead of schedule and under-budget, with final cost of the network coming in at $5.75 million.

Web articles – via partners/network co-ordinators. This website and its contents are the exclusive property of ANGA Media Corporation . We appreciate your feedback and respond to every request. Please fill in the form or send us email to: [email protected]
Previous: Star Wars actor charged in S. Carolina high-speed chase : Police
Next: Ex-Pussycat Doll Ashley Roberts’ fertility worry